Rally for a Service Dog 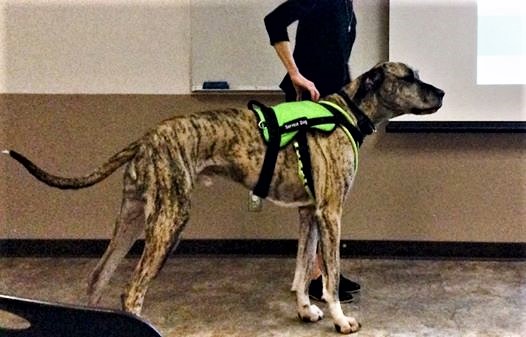 While at a local health fair recently, (held before virus warnings of not to convene in large groups with others), I sat at an exhibitor table with my yoga colleagues. Some of the attendees stopped to say, Hi, talk about yoga and comment on the giant dog beside me. Others took part in Tai chi lessons, worked on movement with various exhibitors and commented on the giant dog beside me.

Said giant dog did very well refraining from approaching any of the attendees who spoke to him or reached out a hand. It’s the skill we’ve been working on the most lately. Having an uber-friendly dog is by far not the worst problem to have in these days of so many issues. However, when that dog is a balance service dog, it’s essential he moves only on my command because if he lurches forward for a friendly pet, I FDGB.

FDGB is what my cycling friend, Jack, referred to as Fall Down Go Boom. On a bike, FDGB happens when the bike comes to an unexpected stop, as when a parked car door opens while you’re pedaling down the lane or your front tire sinks into a pile of leftover winter sand at a stop sign. With a service dog, FDGB occurs when the dog makes an unexpected start, as when he lurches toward an outstretched hand while I’m holding onto him in a standstill.

Throughout the health fair, Bryce did so well remaining at my side (with some encouraging reminders from his human at the beginning), that he rolled over on his mat and fell asleep. I sat and watched the Tai chi instructor across from us working one-on-one with a woman. The instructor stood while the woman was lying down on the floor. She was thin with long fair hair and wore black leggings.

After only a few minutes, Bryce stepped into my view, heading straight for the woman on the floor. I bolted after him and was about to scold him, remind him he’s supposed to remain beside me, but tears came instead. He already knew that. That’s why he got up. I gave him a big hug when I realized that when he woke, he saw who he thought was me on the floor and rushed to my side.

It’s frustrating and scary when someone distracts my dog’s focus on his job. Coaxing, reaching a hand or squeaky-voice talking can cause him to move and me to FDGB,. It’s heart-warming, however, to know that when I do FD, my GB (Good Bryce) is entirely focused on being by my side to help me back up.