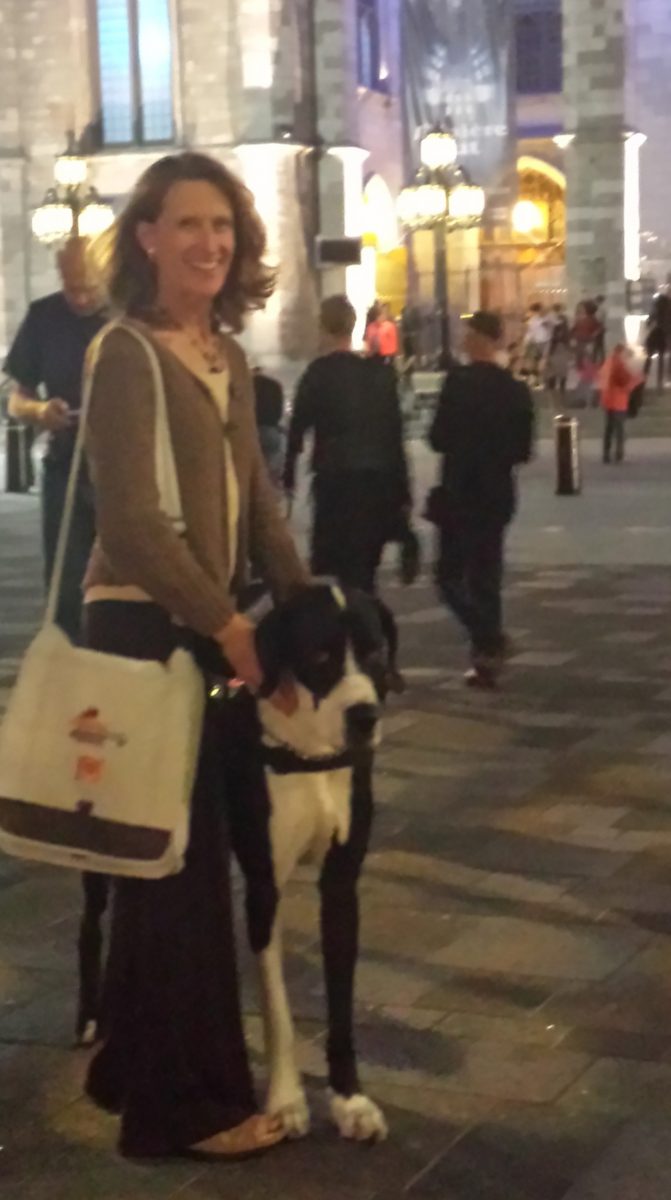 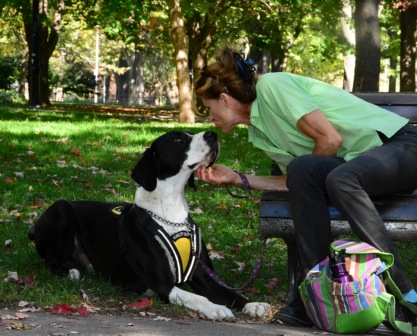 Of the 3,300+ delegates attending the 2013 World Parkinson Congress, 2,300+ were dog lovers. Sir Thomas turned heads along the cobbled streets downtown as well as on the carpeted stretches between presentations at the conference center. Cameras flashed, comments flew in more than one language: Mon Dieux! C’est un cheval! Does he have a saddle?

The paparazzi aside, people also stopped us not just to ask what breed and whether I rode him to the conference, but what service he provided. I was among others whose balance is challenged and their curiosity sprang from experience. Many came to the Round Table I co-hosted on Service Dogs – for anyone who missed it, the presentation slides can be downloaded here.(Special thanks to Carolyn Weaver — and Selma — for sharing their expertise.)

The yoga sessions were well attended and the creativity panel was fun. The poster sessions drew a crowd – those, too, can be viewed here. The tango session I attended, however, cannot — though we did dance together (once my partner gave up on my ability to count to eight while shifting balance right and left and back).

A busy schedule combined with a crowded conference and the sights and sounds of the city added up to quite a dance, indeed, for Tommy and me. We both needed to focus while navigating. Communication — my voice commands, tone of voice, encouragement and praise through the tough spots (bathroom door blocked by screaming toddler and large man with a huge camera, lurching toward us, for example) — was essential. We went out of step a few times; we won’t be voted onto Dancing with the Stars as the next Fred Astair & Ginger Rogers.

Snapshots of him now appear on cell phones around the world. What I’m most proud of, though, are the heads we turned as handler and trained, experienced provider. Not Fred & Ginger, just Tommy & Renee. If our partnership demonstrated why service dogs are a special breed, why their work shouldn’t be dismissed with a pat on the head, why faking it is a federal crime in the U.S., why they are a part of the fabric of their human’s daily life, then we turned minds as well as heads. Mon Dieux.