In addition to his continuing role as Service Dog, Sir Thomas prances and practically rolls over in the role of Mentor.

Sometimes a service dog in training comes for a sleepover. Often times, the visitor is still a youngster who chews through Sir T’s toys, nudges him off his favorite bed and occasionally does the unthinkable: piddles on the carpet. But Thomas maintains his dignity.

Until then two head out into the yard. Then Tommy gets to step a paw back into puppyhood. 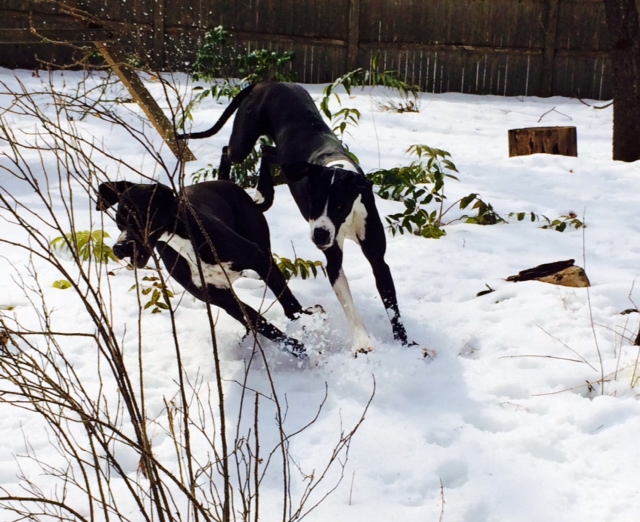 It’s a win-win. The real pup gets the opportunity to experience life in a house with a family, sometimes other four-footed creatures, and, yes, carpets. The grown-up dog gets to romp and act like a big kid.

Until they harness up. Thomas greets his vest with a wag as he dips his head for me to slip it on. The pups still need convincing that a vest is A) Not a toy  B) Better than a toy C) Does not signify that it’s time to play with toys.

Not only is Sir T. ridiculously patient as I fumble and wrestle my fingers into a grip-and-slip move that secures the clasps with two clicks, he waits as the pup gets clipped in.

And then Mentor kicks in. Sir Thomas can gets distracted easily. Especially outdoors. Particularly outdoors on busy downtown sidewalk. Oh, the smells. Oh, the sounds. Oh, the colors.

When a trainee is behind him, though, he behaves like a prince. He doesn’t launch his nose toward the grill aromas wafting from a local restaurant, he walks on, past the outstretched hands of strangers. He knows he’s being watched, mimicked.

The true magic happens when Mentor Service Dog shifts to Service Dog. Sometime during the outing, my meds wane and I shift from mobile to not. With the words, “Tommy, I need you,” he is beside me. His energy funnels into listening for which way we’re to go, to whether he needs to brace or step forward for me. It is in those moments when our energy connects and he’s doing what he’s been entrusted to do that he’s performing his best role as Mentor.