I’m Back with a Twist

I’m Back with a Twist 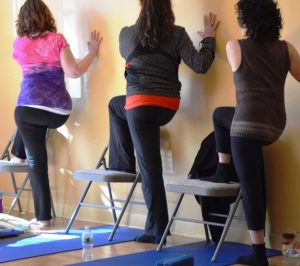 With a teenager in the house (translated: grocery shopping and parenting have shifted to overdrive, much like his hormones), speaking engagements, and an upcoming move to the other coast, I need to practice yoga. Add that my Parkinson’s clocks in at a full decade, it’s no surprise that life has interrupted my writing and posting about yoga practice.

The shift in my practice reflects the changes in my symptoms, (which includes less “on” time). During the increasing “off” times, I turn to yoga. I’ve learned a great deal about how the body moves, adjusts, compensates, peters out. I’ve added modifications in classes, slowing not in approach but in this awareness. I talk it through to students, wondering at times if I’m talking too much.

The answer came last week after a wordy explanation of a twist. The synergy in lengthening and contracting seemed an important piece to include in the description. How better hone in on what’ s happening in the movement than to isolate which muscles are working, which are slacking off, which step in and compensate?

I paused. In the still of the room, I feared I’d lost the class to a nap.

“You know,” one woman said from her mat. “I’m seventy-five. No one has ever explained that.”

Yoga happens. I need to practice writing about it again.