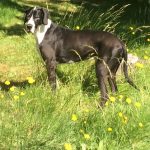 Among the myriad causes for celebration of such a marvelous event lingers one I’d rather see fizzle. No. Die. And quickly.

Sir Thomas’s fifth year among us marks three-and-a-half years of partnering with me. In that time, strangers have been taking our picture. That’s 42 months. Make that 182 weeks. Shall I continue? Okay, in days, we’re talking 1,274.

Surely, you say, his handsome face isn’t snapped on someone’s cell phone every day? No. There have been, however, numerous days when more than one click of some unknown camera captures our likeness.

Therein lies my issue with the puparazzi. First, it is not our ‘likeness’ that is being captured. Second, consider that word capture.

Our images adorn the digital photo albums of people’s vacations (tourist camera-at-ready stroll-by shots), individual’s wow-ya collections (the stop-and-comment crowd who must show their neighbor, brother-in-law, dentist’s sister’s uncle) who pull out the phone with a post-focus, hand on the button May I? and proceed without listening for a response. Of course, there are those who ask, most often because Tommy reminds them of their dog, albeit a terrier or a pug.

Those images are not our likeness, however, size not withstanding. Many of those pictures show only a Great Dane. Not Sir Thomas’s true likeness of such-a-good-boy service dog because they show him without his human, being distracted by someone taking his picture.  And that ‘likeness’ that these strangers ‘capture’ gets locked-in to their image – because there it is on their phones – of what a service dog is.

No more. We are no longer a part of your vacation package or the feel-good story you share with friends.

Especially after my most recent airport experience. Traveling alone, I opted for wheelchair assistance to the gate. Sir T shifted into Pull mode quite readily considering that’s not his usual job. Despite his toes being run over several times, which didn’t help the meltdown mode that comes with the security check. As with past airport experiences, he senses all the tension and trembles, drools and dreads the pat-down. It’s my mission to get through it as fast as possible without any added tension.

Given the poker-face type that I am – not – stress was undoubtedly written across my entire body. Given the size of Tommy, it was hard to miss his quivering. But there we were, collecting items from the bin, while I was reminding him how brave he was, while repositioning in the wheelchair, while directing Tommy which way to go when the stranger in front of us stops with cell phone in position and says,

To which I screamed through the entire terminal:

Upon which the attendant whisked me away, never to witness her reaction.

Next time you see a service dog team, keep it in your pants. Or skirt. Or fanny pack. Rather than a cell phone, use it as a clue phone. That’s the best birthday present Tommy could want.