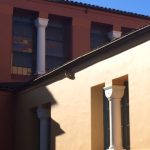 The flu isn’t particular. It didn’t skip me because of the Parkinson’s. Nope, an equal-opportunity virus, it has me lying on the couch coughing up a lung same as anyone else in its path.

I could blame holiday travel strain. Or not.  The past week in San Francisco presented a mix of utter delights (restaurants at every turn – Burmese, Vietnames 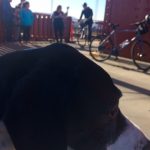 e, Mexican, Californian) and unusually warm and sunny walks (across the Golden Gate Bridge and along Castro Street). Admittedly, there were upended schedules and unpredictable circumstances. But what traveler doesn’t face a few obstacles?

The balancing act between being away from home and being on an adventure, I’ve learned, requires  adaptations. To keep the scales tilting toward the joyful, for example, I factor in nap times and often pack my own blanket (my PD gets me tangled up in puffy duvets). Among a litany of modifications, the most helpful has been: Rather than a self-imposed, two-page, must-see itinerary in-hand, I ditch expectations and step out to explore with only Sir Thomas in hand.

He’s my guide. He led me to the Castro Street’s version of Hollywood’s walk of fame (named the Rainbow Honor Walk). I might not have noticed the sidewalk squares had Tommy not steered so  wide of each one. When I realized we were slaloming past shops, I glanced down to see why. He was avoiding those pesky plaques probably because they felt slippery under his paws. With him standing 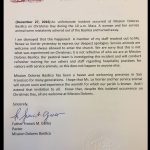 conveniently to the side of each, I could read the inscriptions, tributes to LGBT individuals who warrant equal recognition as their straight contemporaries.

Thomas also led me up the steps of the Mission Dolores Basilica, the oldest mission in California. On a  Christmas morning walk with my stepmother, we’d decided to go inside. Tommy braced for me to steady myself. I noticed that mass was in session. Before I could tell what part of the service we’d entered at, a man told me – he did not ask – to leave. I pointed to Tommy’s vest, whispered that he’s a service dog. He marched toward us, still pointing to the doors, which had not yet closed. The law, I started to say, but was cut off by the man, now escorting me out, that the church is above the law.

The pastor responded with a letter of apology the following day. I thank him for his quick attention and thoughtfulness. (As I do the scores of supportive Facebook friends – what a light in the darkness). Though I’ve returned home and can’t physically stand before him on church ground (I can barely move off the couch at this point), there’s more that’s needed.

The man was unaware of the obstacles I’d faced down that morning just to simply be on those steps at all. But that’s my point. He knew none of the other people’s medical, emotional, financial, dietary, hair-loss, gum-chewing – you-name-it – issues either. None of us do. That’s part of what puts us all on equal ground. The moment the man singled me out marked the moment it wasn’t about me.

He turned away the disabled. We are not to be singled out, not by the flu virus or church staff.  What’s needed so this doesn’t happen again?  More education and training, so that an understanding spreads throughout the diocese – throughout San Francisco and beyond, to anyone’s own hometown church –  that equal means alike.