Were they to meet in the after world and strike up a conversation, Sir Thomas would disagree with Mr. Shakespeare on the subject of names. Tommy knew that, called by any other name, he needn’t respond.

I made up so many on-the-spot names for him throughout our time together. Rarely did we go out uninterrupted, whether while grocery shopping, dining out, walking down the street or in an airport bathroom. Someone always stopped to ask his name. Most often, the stranger was polite, if clueless about interrupting his work. The last thing I wanted was for the person to start calling out to him and really mess with his focus. So, I invented names. But Tommy never even cocked an ear when he heard Teacup, Spot, Sire, Ezekiel, Killer, Spot, Jehoshaphat.

He knew not only his own name but also the subtle differences in the nicknames he earned.

Tommy: The staff and volunteers at the Service Dog Project (SDP), where he was born and raised, named Tommy. Starting out as Thomas, I heard two versions of the story behind his name. One was that he was named after Carleen’s (the founder of SDP) husband who had recently passed away. The other was that Tommy was the name of a volunteer’s favorite baseball player. Tommy knew that when I used his given name, he needed to switch to work mode because I needed him.

Sir Thomas: In Act 1 of our partnership, I added Sir because of his graceful prance and his mantle coloring. He appeared to always be formally dressed, perhaps like a royal Shakespearian character. When he heard that formal version of his name, he’d stand and duck his head so I could slip on his vest because it was time to go out in public, time to work.

Tommy Talulah:  Talulah translates from Naïve American Indian as dancing waters. The only form of water that Tommy liked was the type in his bowl. Raindrops: intolerable. Beaches: overrated. And puddles? They’re earthly black holes! Dodge them, dart around them, leap them. Whenever Tommy shuddered at droplets or waves on the shore, I’d laugh and call him by this name. Ditto when a leaf fluttering across the sidewalk or a flag waving overhead was the cause of his quivering. He never quite saw the silliness of his reactions to not-really-spooky things, but he did calm and wag.

Tommy Toodle Doo: Preceded by Loo, loo, loo, this call meant Let’s hurry along. His SDP trainer, Megan, taught me the first part – she often used it to get a gaggle of pups across the farm. My add-on personalized it and Tommy knew it meant fun-run time. As a young guy, he’d gallop to me, often with a side trip of figure eights around the yard. By retirement, the fun-run had morphed into a slow, but still graceful, trot. Sometimes, he even add a side trip into the yard to hop-step a circle or two.

Tommy Boy: Reserved for nighttime, he knew the ritual: Last-chance outing, cookie treat, tuck-in, ear rub. Ensconced in a fleecy blanket, without any off-key comments or histrionic hands-over-ears response I’d otherwise get from the humans in the house, I sang to him my edited version of Oh, Danny Boy:

Retirement suited Tommy well, until the day it didn’t. In his final scene, he listened again to one last rendition as I sang and said good-bye to Tommy, Sir Thomas, Tommy Talulah, Tommy Toodle Doo and Tommy Boy. Maybe Shakespeare was right. Tommy by any of these names was just so sweet. 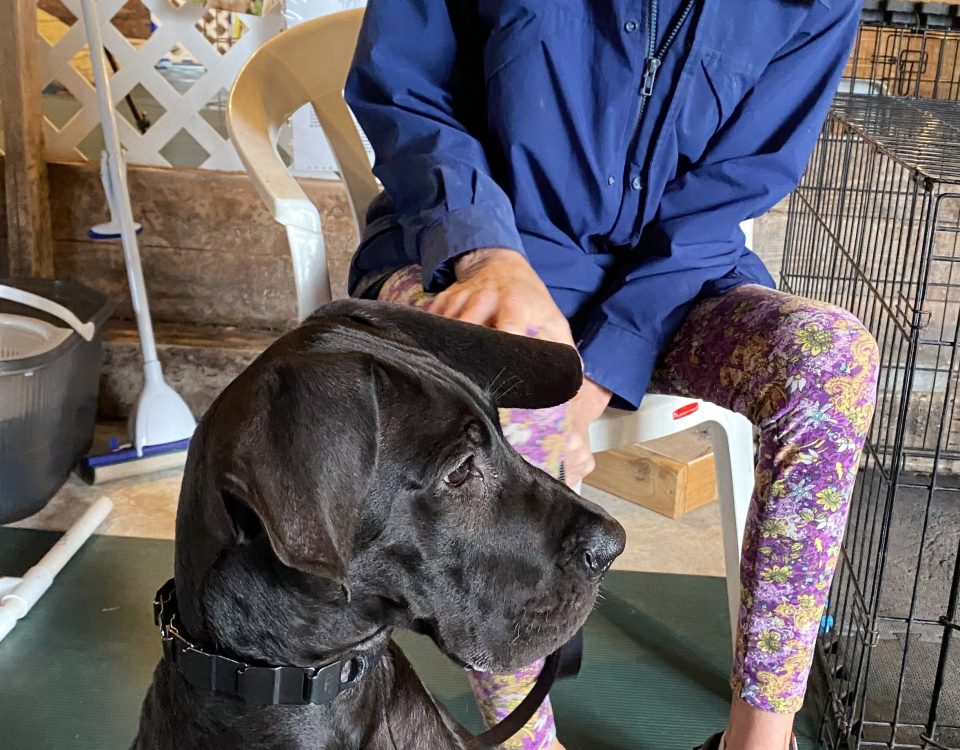