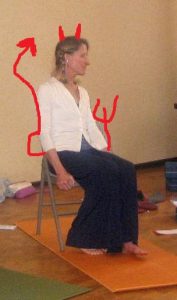 E. W. Jackson is the Republican candidate for lieutenant governor of Virginia. According to the Huffington Post, his agenda items include yoga warnings:

Yoga may leave unsuspecting people vulnerable to satanic possession…. In a post for the National Review on Wednesday, Betsy Woodruff highlighted some quotes from Jackson’s 2008 book Ten Commandments to an Extraordinary Life: Making Your Dreams Come True. Among them was one about the hazards of yoga.

“When one hears the word meditation, it conjures an image of Maharishi Yoga talking about finding a mantra and striving for nirvana,” Jackson wrote in his book, according to Woodruff. “The purpose of such meditation is to empty oneself. [Satan] is happy to invade the empty vacuum of your soul and possess it. Beware of systems of spirituality which tell you to empty yourself. You will end up filled with something you probably do not want.”

So THAT’S where I got Parkinson’s. Stoopid, stoopid yoga.

The Yoga of Travel