Dames with Danes: Count on It

Up in the Air with a Service Dog 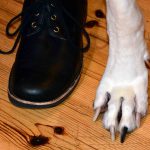 Since all eyes land on Sir Thomas when we’re out in the community, I take his grooming seriously. My hair, on the other hand, tends toward that ‘windswept’ look (a.k.a. ‘uncombed’) or gets tucked under any variety of hats (especially when ‘windswept’ leans toward ‘witchy’). As for my nails, there’s typically a mix of ochre and cadmium red paint spattered on my fingertips.

Sir Thomas, however, leaves the house glossed and trimmed. Admittedly, he’s a handsome guy to start. But after a few brush strokes, he shines. There’s a healthy luster along his back as well as an inner glow from our one-on-one, hands-on time. He loves it, leans into it, groans contented groans

Toenails are a different story. If a pair of clippers lurks somewhere in the room, he knows it, slinks away from it, quivers in a mass of drool. He’d had a nail cut too short in his puppy days and the memory clearly lives on.

To keep his claws this side of talons and reduce the trauma of trimming, I decided on a dremel. I’d never heard of one until a friend suggested it. A power tool? Really?

First, I switched it on to its lowest setting and moved about the house with it in hand. My plan was to desensitize Tommy to the potentially scary hum. Did this a few times. No quivering. Hmmm, this may work.

Next, I sat near him and filed my own nails. Did this for a couple of days. No slinking.

When I powered up the dremel and pressed it against his nails, he tolerated the vibration for a whole front paw. Impressive. When I leaned in to work on the next set of nails, I learned an important lesson: Take Tommy’s grooming seriously. Take power tools more seriously.

I’d blame the mishap on my Parkinson’s, but it had more to do with my hair. Add a power-tool novice to loose strands of ‘windswept’ hair. Next, lean in for close work with this long-stemmed, hand-held machine that whirs in a tight circular motion. The result: Yelp! Not from Tommy, but from me.

The dremel snatched my hair and wound itself tight until it spun against my skull. My hand still gripped it, my thumb searching for the ‘off’ button. Once I found it, the only way to get the dremel out was with a scissors. Needless to say, I wore a hat for a few days after the Dremel incident. Oh, and from now on, I’ll be wearing one every time I groom Sir Thomas.