In the midst of the food court’s strutting teens and screeching toddlers, Sir Thomas folded onto his mat in that sphinx-like move that Danes do and gazed those soulful eyes at me. I instantly aimed my phone at that regal pose (he’d even crossed his front paws!). But instead of his handsome image appearing on my screen, a message popped up: “Cannot Take Photo.” Apparently there’s a limit to how many I can store on my phone. Namely, 2,990, according to the count at the top of the icon. 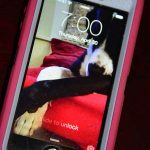 n-fried, deep-fried and stir-fried lunch surrounded us as I focused on getting that picture. I deleted 277 blurry selfies and inside-of-my-purse auto-shots. But the phone insisted I was still out of storage space.

Thomas let out a deep sigh, uncrossed his front legs and lowered his heavy head to rest between them. His message seemed clear: stop struggling to catch the perfect light on the subject and  place a hand on the subject himself. I stuffed the phone back into my purse and rubbed his ear.

Meanwhile, as I surrendered to the moment, shoppers, mall-walkers and store staffers had been capturing those moments. Cameras appeared from pockets and palms as people passed. Some grabbed candids as they shifted bags from arm to arm. Others stopped to aim before pressing the button. A few asked if they could take his picture. One elderly woman leaned in with a special request: Could my son scoot his chair out of the way so she could get a clear shot of the dog?

Watching this reminded me of traveling in lands where taking pictures is discouraged. The guidebooks recommended leaving cameras back in the hotel room. Each photograph steals a piece of a person’s soul, they explained.  Considering the language of photography – take, capture, frame, grab, catch, shoot – perhaps there is something to that belief.

Tommy’s picture has been taken, captured, and shot in airports, hotels, shops and restaurants by travelers from around the world. Apparently he doesn’t have a limit to his soul, because there’s still quite a bit ther 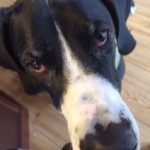 e. If pieces of him have been spread around the world, the world’s a better place. Here, then, take this one, too.