West Coast Arrival
Sir Thomas and I are adjusting to PST the best way we both know how: lots of naps. We’re also getting plenty of fresh air  – and it really does feel fresh. We’ve been on quite a few walks here on this western coast. 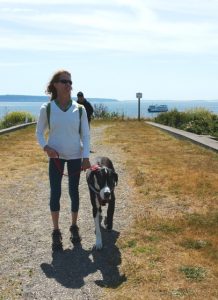 East Coast Departure
My husband, son, and adorable rescue mutt (not to say husband and son aren’t adorable, too), left two weeks before I did and drove across the country,  Though Thomas wondered where the family had gone, he liked the one-on-one time with only me (and the pet tortoise) in the house. The trip appealed to my sense of adventure, but only for a minute or two. The thought of being crammed in a car for five full days in a row made me shudder. Didn’t put the tortoise through that either – he got Fed Ex’d!

Tommy was, of course, stellar in the airport and all through the flight. He has become quite the seasoned traveler.  This was the first time on my own with him and I was curious how the person booked in the seat beside me would react to his or her, shall we say, lack of leg room.

The man didn’t hesitate to say, Not a problem, and simply climbed over us, wedged himself without a word into the window seat, found a spot for each foot, and fell asleep. The flight attendant had to wake him to offer an open seat. He climbed back out and Tommy and I spent the 5-1/2 hours with the row to ourselves marveling at how adaptable some people can be.

At Our Destination
I’ve been around town with Tommy. Washington state has some definitive service dog laws regarding fraud. At the same time, the state does not grant access rights to service dogs in training, leaving it up to businesses whether they’ll allow access to pups with trainers. It made me curious what I might run into here. I couldn’t have predicted the response.

Dogs – pets – are with their owners in all sorts of places: hardware stores, coffee shops, ferries over to other islands. All thus far have been well-behaved and on leash. When people see Tommy’s vest, their reaction (in addition to ooohs and aaaahs about his size and handsomeness) is a simple, “Oh, that one’s a service dog.” There have been the occasional hand reaching out and toddler to dodge, but in general, there’s been no issue. By allowing pet dogs, expecting that they’ll be under control, appears to keep the frauds with their yappy Fluffy-in-a-fake-vest away. Who knew?!

We’re Home
We’re off on a hike in the Olympic range today. The park rules say that dogs are not permitted on the trails with the exception of service dogs with certification. The ‘certification’ I plan on handing them is one of the brochures that Lynne (Willow’s mom) and I put together –  the one that refers back to the ADA that there is no certification and that they can’t require it for access. Will report back.