Ask Not What My Dog Can Do for You

Balance Dogs and U

Ask Not What My Dog Can Do for You 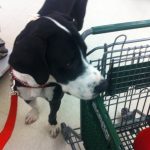 emarks into one ear and a tiny angel on the other side saying kind words?

I am that character every time I grocery shop. The other day, I backed my cart  and turned, Sir T in step beside me, when the young couple stopped and stared.

“Oh, I won’t pet him,” she said, not to me so much as to Thomas, based on the focus of her gaze. The husband locked eyes on him, too, adding, “We love the big dogs.”

Devil: “They love dogs? They hovered over him baring their teeth. That’s totally intimidating in doggie world. Did they not see that his tail is completely tucked? And where’s the love in interrupting his work?”

Angel: “They meant no harm and were simply being friendly.”

I went with the angel and offered a quick smile, which I hoped I passed off as polite. I asked Thomas to walk on and we wheeled around them in time to overhear the “Look, honey, a helper dog,” from Aisle 1.

Devil: “Seriously? You’re pointing at the person who’s different, literally pointing, and then when your kid gets older you’re going to tell him not to point? Keep your private teaching moments a bit less public. And helper? You mean like one of Santa’s elves? No, it’s a bit more complicated than that. If you’re going to teach, teach it right: He’s a service dog.

Angel: “She meant no harm and was simply being friendly.”

I ignored them both and went for my shopping list. I’d gotten only to the second item before a woman leaving the deli strode by, pausing just long enough to say, “Good boy.”

Devil: “Okay. Hold on. Who made you boss of the service dog? The way he conducts himself while working is under my jurisdiction, not yours. How many hours have you spent with him? Oh, wait, none, being that he’s with me 24/7.”

Angel: “She meant no harm and was simply being friendly.”

I let that one go since the woman was already gone. I steered toward produce and leaned on Thomas to steady myself while reaching for a head of lettuce.

Near the avocados, a man stood watching. I pushed forward and he started to move toward me, perhaps to make space so I would have room to turn. Not so. He was timing it so when he passed, he could slap-slap Tommy’s behind without my noticing.

Devil: “Drive-by-petting alert! Dude, did you not notice the service-dog full regalia? Which of the four DO NOT PET patches did you miss? Or do they not apply to you? You’re special? You’re certainly self-centered. That pet was for the dog?  Given the way he lurched, I’d say, um. NO. That pet was for you.”

A dark-haired woman about my height looked directly at me when she spoke.

“May I ask you a question?”

I set down the bag of bagels and nodded, though still on guard.

Devil: “Will it be the name question? The age question?”

“How does someone apply for a service dog?”

I mentioned the ADA, various agencies.

“For my daughter,” she said.

I summarized processes and policies, noted a few web sites.

She thanked me for my time. I thanked her for asking.

On our way to the checkout line, a woman stepped toward us.

Angel: “She means no harm…No, scratch that.  Can’t fix thoughtless.”

I opted for a smile and kept walking.

Angel: “Because she asked?”

Asking before taking is more civil. But even in asking, they want something from my dog – feel-good pats, pictures, long looks, kisses, paw, attention.

No, my smile was left over from the dark-haired woman’s questions. They were about helping someone else feel better