Read All About It!

Taking Care of Each Other 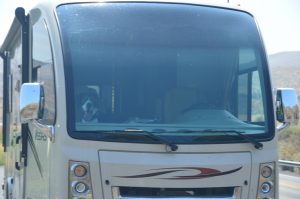 It can be a tough go living with this ridiculous disease, no doubt about it. Yet, I can look back with gratitude. For when the going got tough, I got going. On vacation. With a bunch of guys.

Andy
Pre-Parkinson’s vacations with my husband routinely involved bicycles. We strapped on the panniers and rode circuits dotted with B&Bs, each a day’s distance apart. Whether rolling across England or New England, we’d wake to the aroma of bacon and coffee, load up, enjoy the scenery, fresh air and exercise before the next inn. It all added up to: Ride, rest and repeat. Alas, there was a down side: pets couldn’t come along. Oh, and one other: heavy rain.

When the dark cloud of a Parkinson’s diagnosis tried to rain on my cycling getaways, Andy, thankfully, was quite flexible. Rather than touring the perimeter, we settled in and, each day, rode a different loop that radiated out from our hub. Added bonus: no more lugging panniers.

Fred
Our son increased the number of riders. Plus, my waning balance needed a solution. We were like a textbook word problem: If three people of varying ages and health conditions ride the same route, will they arrive at their destination at the same time? We did the math. With three seats on two wheels, they will!

Captain Andy handled the balancing. First stoker (me!) kept pedaling, but without those pesky, remaining-upright concerns. In fact, my hands were freed up to deliver snacks to the second stoker behind me, who had dubbed our triple, Fred. (Thanks, Fred, for more than tripling the fun!) 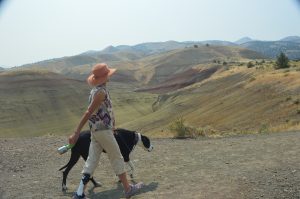 he formula for remaining upright while on foot was to add four more feet. Not only has Sir Thomas accompanied me from Maine to Florida and Montreal to Victoria, he has enabled me to do so. As the effectiveness of my medications became less predictable, dining out and not always knowing where the next bathroom was began to darken travel adventures. Still, I adored an afternoon bike ride.

James
Surprise, surprise: Bikes +  dogs + bathroom + dinner without going out + exploring new places does add up: an RV! All my guys in the same space! And now that we’re out west, I see that those early days of circuitous routes wouldn’t be possible in these wide open, huge, vast distances with no B&Bs dotting anything on the horizon. Ha, take that you toughie, Parkinson’s. I’m still going on vacations.

Brycen
Biggest surprise of all. My guys and I traveled to the high desert of Arizona. Not only did we venture through the canyons of Utah along the way, we met another guy who’ll soon be traveling with us. Ten or so months from now, when his training is completed and Tommy is ready to retire, Bry 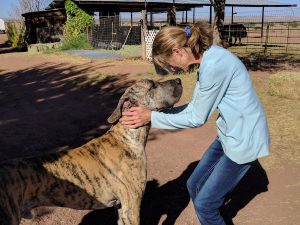 cen will step in with us as my new service dog.  Tommy will get to be the pet, and thanks to James, will travel alongside the new guy on any vacation.

It’s tough, admitting that Thomas will age. It’s tough wondering if he’ll feel replaced, less loved. But when the going gets tough, I’ve learned to do the math. Parents of more than one child already know this. Having an only child, I’m only now learning: the love isn’t divided. It is multiplied. As is my gratitude.