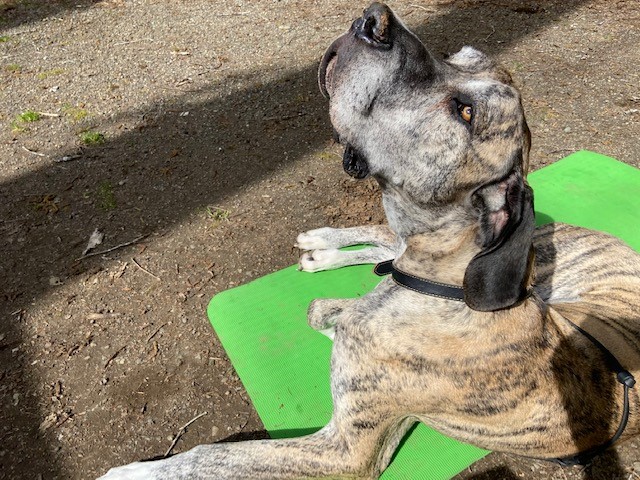 I’m convinced that Great Danes are humans, either reincarnated or dressed in dog outfits. What else could explain their size, intuition and the depth of grief when they’re gone? There are sayings that try, such as “Everything happens for a reason” or “What doesn’t kill you makes you stronger ” or “It was meant to be.” To those sayings, I say, Hoo-Hah Alert!

HHA number one: Reason? There is no rationality about the plight of Afghan women right now. On a scale closer to home, I can see no logic as to why a young, happy, healthy helper dog gets lymphoma.

HHA number two: Be strong or die? I’m thinking that a few of those women might rather be dead. Again, bringing it home, some biggies that should categorize me as The Hulk: I’ve survived a childhood stroke, lost my kid sister to lung cancer and have lived with Parkinson’s for sixteen years. For the past five months, I’ve witnessed the light in my five-year-old Great Dane’s eyes go dim and it’s done zippo to my strength. What it has done is made me sad and really pissed off.

HHA number three: Meant to be? Shorten that to mean and I’ll buy into it. Yes, it was mean that Brycen lived too short a life. He didn’t experience the best of his romping years and didn’t get to do the service dog work he became so good at doing.

Worse, to me, than the HH quality of those quotes, they strike me being so passive. For one, it’s like a shrug of the shoulders after so many weeks of actively monitoring his meds, showering loads of attention and watching for signs of pain or discomfort. Second, when shit happens, we have a choice. React or respond. To me, those quips fall into the first category. As disconcerting and painful grief’s array of emotions are, they need working through not whisking away.

If there are any words of wisdom that even begin to explain the brief time my gentle giant had on this earth, it is this quote: “We are not humans having a spiritual experience, we are spirits having a human experience.” Brycen’s great, big spirit has been set free.