What do
a teenage computer hacker,
Great Danes
& yoga
have in common?
Renee is the author of books on each.

On Writing for Young Adults

A part of me still lingers at my high school locker, number 262. Across from the office and next to a bathroom made for interesting eavesdropping, especially since the girl with locker 263 was rarely there. When she was, a new bruise usually was, too. Between the whatever-shrugs and the melodrama up and down the halls lie young adult stories that need to be told. 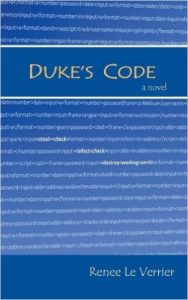 The thrill of hacking into corporate systems used to simply getting in, like slipping into a double-locked room through a hole in the
floorboard.

YA Short Stories by Renee

The minute we stepped through the door, I knew we shouldn’t have. Smoke wafted up from the living room, and it wasn’t all from cigarettes.

Turn around, I thought. No one saw us; we can still save face, slip back outside, pretend we were never here.

I reached for Becca’s arm, but she snatched it away.

THE party attire was black. Even the tattoos lacked color. Somehow, Becca had known the dress code; she blended right in with her mini skirt and jacket. I wore jeans and a cropped red T.

“Becca,” I breathed into her right ear. “We don’t belong here.”

“We do so. Eric invited me, and told me to bring a friend.”

She whirled her head around, clipping my cheek with her ponytail.

Ignoring the sting, I whispered, “You don’t even know his last name. And this isn’t our crowd.” Not that we had a crowd, but if we did, this wouldn’t be it.

“There he is.” She was off toward the couch where Eric Something swigged a beer.

He’d planted himself beside her in World Cultures our first day at East High. I remember thinking, Hello, it’ll take more than that to override The Amy and Becca Pact. We’d sworn to survive freshman year together, just like we had survived together all through middle school – just us. We weren’t jocks, nerds, mouth-breathers, cheerleaders. We were Amy and Becca.

I eased into the kitchen and tried to blend in. Yeah, I was about as subtle as passing through the guy’s locker room. I slipped by a cluster of girls taking hits from a jug of wine. One was rolling a dollar bill into a straw. We so don’t belong here, I thought, and hunted for a safe place to think. The bathroom. A sliver of light shone from a door across the way, so I rapped on it and pushed it open.

The girl sprawled on the floor didn’t move. Face-up, her eyes were rolled back. I didn’t know I’d screamed until the crowd gathered.

“Mimi’s passed out again,” someone mumbled.

I dialed home on my cell phone and dragged Becca out to the driveway.

“I realize how low it is on the cool scale to freak at a party,” I told her. “But, that girl looked dead.”

Becca crossed her arms and stared at the house. Oh, man, do I have the strength to hold her back if she heads for the front door? She turned her gaze to mine. “Fine,” she said. She didn’t uncross her arms, but I was glad she chose to wait with me.

In the back of Dad’s car, I convinced her to come over the next afternoon. I wrapped my arms around her before she slipped away.

When Becca came over, we each went for our usual spots in my room. It’s what we’d done every time we had something important to discuss. She collapsed on her stomach on the rug, and I sat cross-legged on my bed, my pillow in my lap. It felt like old times.

“You never told me who you got for English.” I said, starting on safe ground.

She took a minute to answer. “Loser McKenna. You?”

“Mrs. O’Toole. She’ll be directing the play and spent the whole first class describing it. Sounded kind of fun.”

Becca frowned but didn’t say anything.

She didn’t hug me, cry, or tell all like she used to do. If I stretch out my right leg, my toes would touch her shoulder, I thought. We were that close. Or maybe not. Maybe my foot would reach only as far as the wall between us. I clutched the pillow as though it were about to float away.

Over the next week, I tried her cell, sent e-mails, and even tucked a note in her locker, but nothing. Was she sick? On Friday, she strolled into World Cultures. Late. I wanted to slap her I was so mad, but I could’ve squeezed her at the same time. Becca was back.

“Where have you been?” I whispered.

Becca was never a giggler.

Eric slithered into his seat. Becca giggled again. Oh, no, I thought; she’s high. What did he give her?

This is not happening. How can she be next to me and be even further away than she had been all week? The bell snapped me out of my wallow and I tugged on Becca’s sleeve.

It was the first time I’d lied to her. But she was a wizard at getting the Tampax machine to cough up a tampon without the quarter, and I had to get her away from Eric.

She whacked the dispenser with her shoe. Nothing. She slammed it again with her heel.

“You’re just jealous I have a boyfriend,” she yelled, waving her shoe at me and then at them. They disappeared out the door.

“This has nothing to do with boyfriends.”

“Oh, maybe it has to do with friends. I have friends now, and you wish you did.”

I blinked away the tears. Still, I felt the burn.

“It’s about friendship. Yours and mine.” I heard my voice crack.

“Amy, They want me to hang with them.”

“They want you to get high with them.”

“No, Amy, we’re not. We haven’t been for a long time. You just haven’t noticed.” She shoved her foot back into her shoe and marched out of the bathroom.

The tiles seemed to lose their straight lines. I gripped the sink and gazed into the mirror and saw only me staring back: Amy, without Becca. I expected to see a jagged edge along the side of my head and shoulders, where Becca had been torn away. But the image was whole, the curve of my face smooth. “I’m here if you change your mind,” I whispered to my reflection.

I don’t remember leaving the bathroom, wandering to English. I definitely didn’t follow much of what the teacher said. It was all I could do not to cry again. Mrs. O’Toole ended class with a reminder about the school play auditions. I wrote down the time and place.